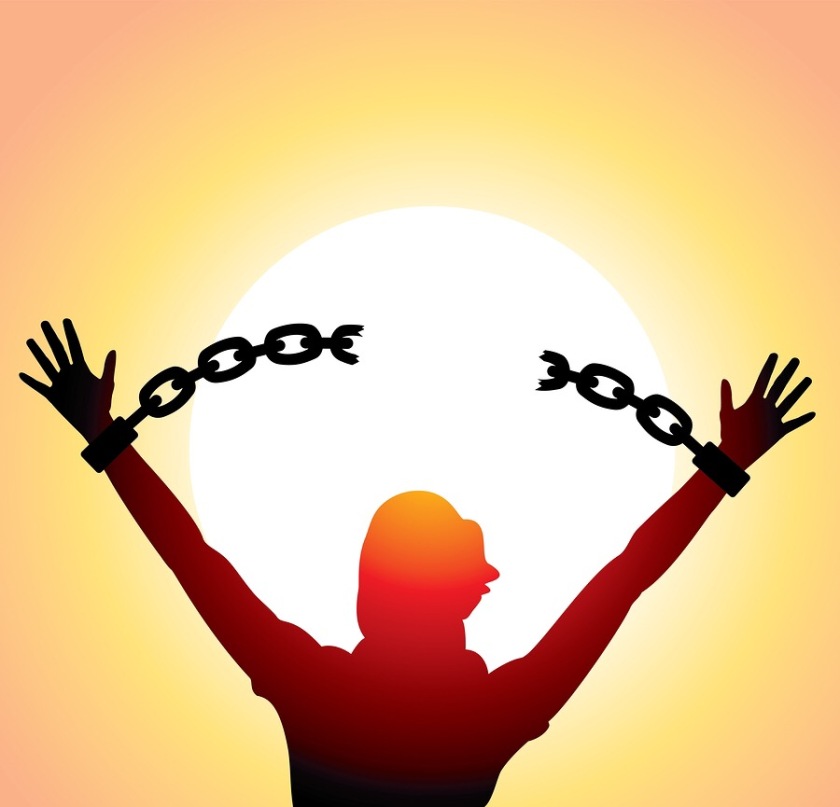 Democratization of judicial process much needed value today. It seems hierarchical monarchy is ruling the process. Its right to raise a point now. Judiciary cannot hide behind the courteous screens. The establishment of welfare states by capitalist countries in the West is one of the enduring legacies of the challenge posed by the socialist block led by the Soviet Union.
Subin Dennis

While the October Revolution and the subsequent building of socialism brought down inequalities in Russiasharply, the expansion of the socialist block following World War II and the threat that socialism might spread to the capitalist core forced the Western capitalist countries to bring about far-reaching changes in their home ground. These changes – involving, among others, the setting up of welfare states and higher taxes on the rich – considerably reduced inequalities in those countries, until the massive reversal that occurred with the advent of neoliberalism.
A look at the changes in the income-share of the richest sections of the population in the United Kingdom and France, for instance, is instructive.

The period from the end of World War I to the end of World War II saw a decline in the income-share of the top 1%. According to Thomas Piketty, whose work on inequality has led to more and renewed discussions on the issue in the recent years, this was a period when capitalism was exposed to a series of shocks. The Western capitalist countries – especially those of Western Europe – saw the destruction of wealth in physical terms as a result of the wars. They also suffered losses of assets through expropriation following the Bolshevik Revolution in Russia. The modern progressive income tax was born during the period immediately following World War I, as post-war reconstruction required new sources of revenue. There were several waves of working class strikes in France in May and June 1919, less than two years after the Bolshevik Revolution. It was in such circumstances that the ruling classes decided that those with the highest incomes had to be taxed more to ensure social stability. The introduction of the progressive income tax was accompanied by the introduction of higher inheritance tax rates in a number of countries such as the United States, Britain, Germany and France.

But an even sharper decline in inequality was to occur following the Second World War. The leading role played by the Soviet Union in the victory against the fascist powers in World War II led to an enormous increase in its prestige. 27 million Soviet citizens lost their lives during the World War II – the highest casualty figures for any country during the war – and the Nazis suffered three-quarters of their war-time losses fighting the Red Army. The socialist block expanded on an impressive scale following the successful conclusion of the anti-fascist war, with a number of countries in Eastern Europe adopting socialism. Decolonisation which led to the loss of foreign assets contributed to the decrease in economic inequalities in a number of Western capitalist countries which were hitherto colonial powers. In several Western European countries which did not become socialist, the power and prestige of the Left – including both the communist and the non-communist (the social democratic) Left – increased immensely. The stellar role played by the communists of France, Italy and several other countries in the Resistance against the fascist forces had contributed to the tremendous increase in their influence and popularity.

The French Communist Party (PCF) even emerged as the single largest party in the elections held to the interim Constituent National assembly in 1945, with 26.2% of the vote. In the November 1946 elections which elected the first legislature of the new French Fourth Republic, the PCF again became the single largest party, with 28.3% of the votes and 182 out of 627 seats. The PCF participated in governing coalitions until 1947, when, with the beginning of the Cold War, the PCF ministers were expelled from the government.
The Italian Communist Party also became a powerful force after World War II. The communists were part of the government in Italy from June 1944 until May 1947, when they were expelled just as in the case of France. In the general elections held in 1948, the Popular Democratic Front led by the PCI came second with 30.98% of votes. In fact, the American magazine Time had claimed that a victory for the Left would take the country to the brink of catastrophe. According to renowned British historian Eric Hobsbawm, the United States had even planned a military intervention if the communists won the elections.

It was in this context that the Western capitalist countries framed their economic policies. So while the Soviet Union had set up the most gigantic welfare system that history had seen, the ruling elite in many of the Western European countries realised that the threat of socialist revolutions in their own countries could be fended off only by allowing significant concessions in favour of the workers.

Thus these countries set up public sector enterprises, nationalised strategic industries and sectors, increased workers’ wages and established social security systems, while public education, public health and public housing were expanded massively. Keynesian demand management policies led to near full employment being achieved – the average unemployment rate in western Europe during the 1960s was 1.5 per cent (today the unemployment rate in the European Union stands at 8.6%).

In Britain the Labour Party recognised the dangers of economic power being concentrated in the hands of a few. Their manifesto for the general elections in 1945 said:
“Hard-faced men and their political friends kept control of the government. They controlled the banks, the mines, the big industries, largely the press and the cinema… They controlled the means by which people got their living. They controlled the ways by which people learned about the world outside… The great inter-war slumps were not acts of God or of blind forces. They were the sure and certain result of the concentration of too much economic power in the hands of too few men… The price of so-called “economic freedom” for the few is too high if it is bought at the cost of idleness and misery for millions. There are basic industries ripe and over-ripe for public ownership and management in the direct service of the nation.” “Security from war, food, houses, clothing, employment, leisure and social security for all must come before the claims of the few for more rent, interest and profit,” said the Labour Party leader Clement Attlee.

The Labour Party won the 1945 elections, nationalised key sectors such as electricity, gas and railways, and laid the foundations for what was to become the extensive social security system in Britain, including the National Health Service. And of course, the most famed social security systems were set up in the Scandinavian countries with their significantly smaller populations.
The emergence of the welfare state in the countries of Western Europe was financed by increased taxes on the rich. France and Germany had top marginal tax rates of income tax (applying to the highest incomes) between 50 and 70 per cent from the late 1940s until the 1980s. In Britain, the rates applicable to the highest incomes and estates was 98 percent in the 1940s, with the top rates touching that peak again in the 1970s. The United States also had very high tax rates (the top rate was around 90 percent until the mid-1960s) until the early 1980s, with an attendant decrease in inequalities, although its social security systems never became as robust as Western Europe’s. Inequalities in the US skyrocketed in the decades since the 1980s.
Things changed drastically from the 1970s and 1980s onwards, with tax cuts for the rich, privatisation of the public sector, whittling down of welfare systems, smashing of trade unions and stagnating or declining real wages. The result, as expected, was a steep increase in economic inequalities, as can be seen in the charts below.

The richest 10% in Britain had 38.37% of the total national income in 1937, which came down to 32% in 1949, and further to less than 28% by the end of the 1970s. With the rightward shift of economic policies led by Margaret Thatcher in the 1980s, the share of the top 10% rose sharply, reaching 43% in 2007. There has been a slight decline in the years following the economic crisis which began in 2008, but at 40%, it is still higher than the pre-World War II levels. The richest 10% in France accounted for 43% of total national income in 1938, the year before World War II began. With war-time destruction of wealth and the post-war turn of economic policies, it declined to less than 30% by the early 1980s. Since the attack on the working class in France has been less vicious and the mollycoddling of the rich less stark compared to Britain, the income-share of the top 10% in France has registered only a marginal increase in the recent years. 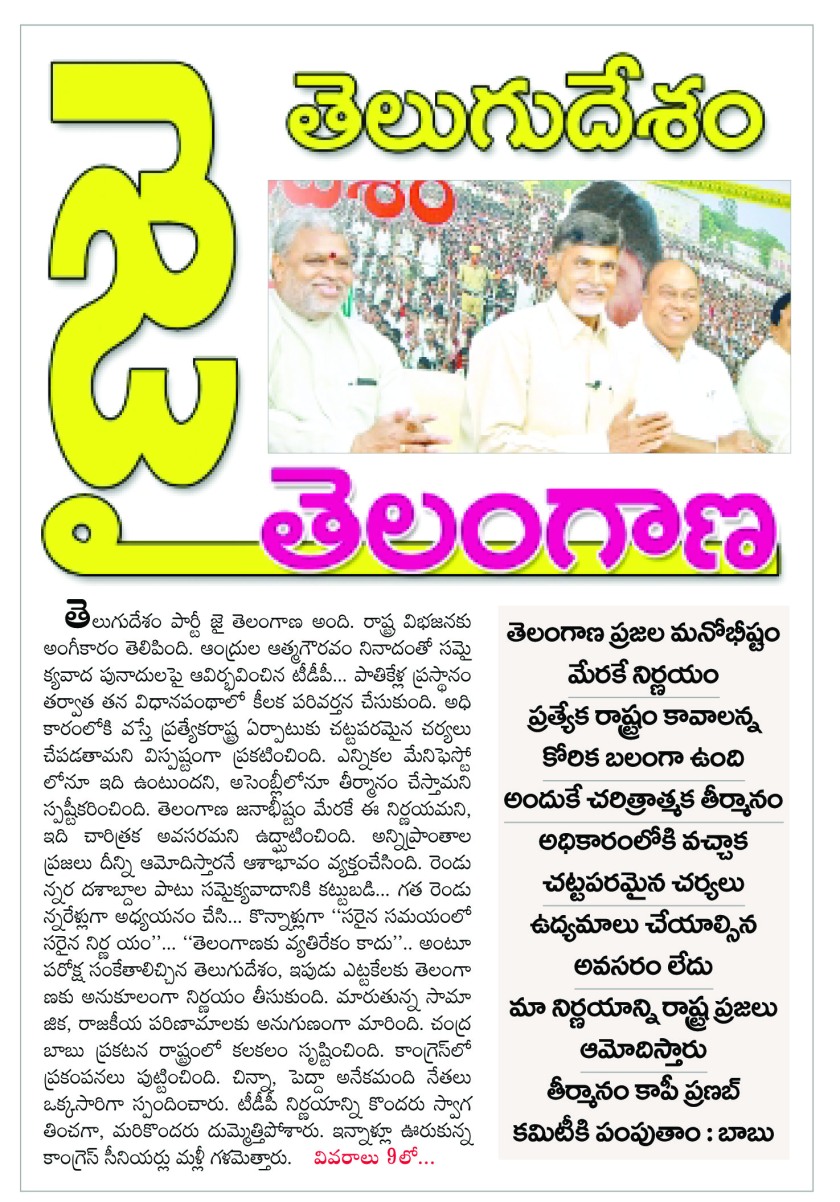 Andhra CM Chandra Babu may be thinking that speaking against State division will be benefiting to him again. But it won’t. His party made resolutions AND SUPPORTED TELANGANA FORMATION IN THE BEGINNING AND BACKTRACKED ON ITS STAND AND TRIED TO CHEAT BOTH TELANGANA AND ANDHRA PEOPLE. When YSR opposing Telangana State formation during 2004-09, Chandrababu taken a stand and supported division. And When Centre started division process he twisted his tongue again. Now After three years of division too his indigestion not gone. Chandrababu He is the most dishonest politician on the earth. See what he is saying now:
http://www.eenadu.net/homeinner.aspx… 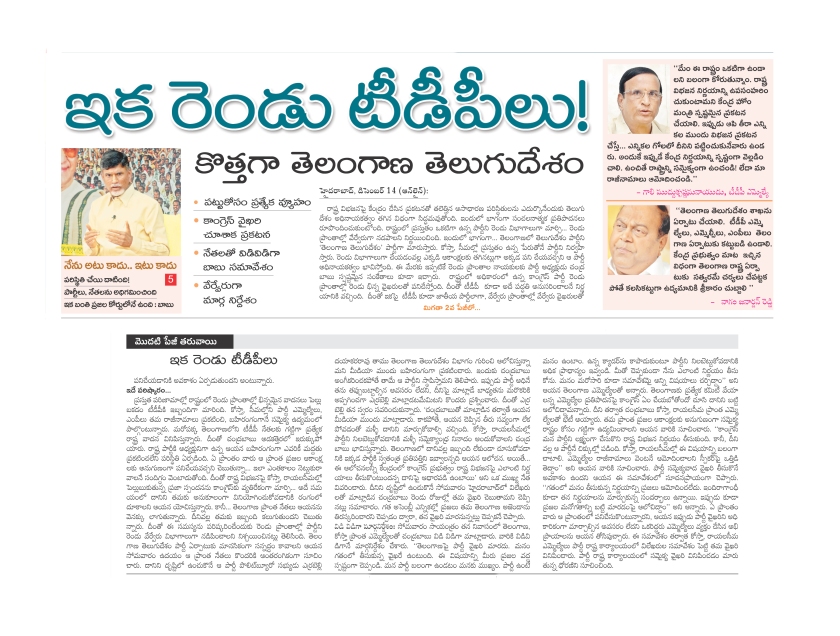 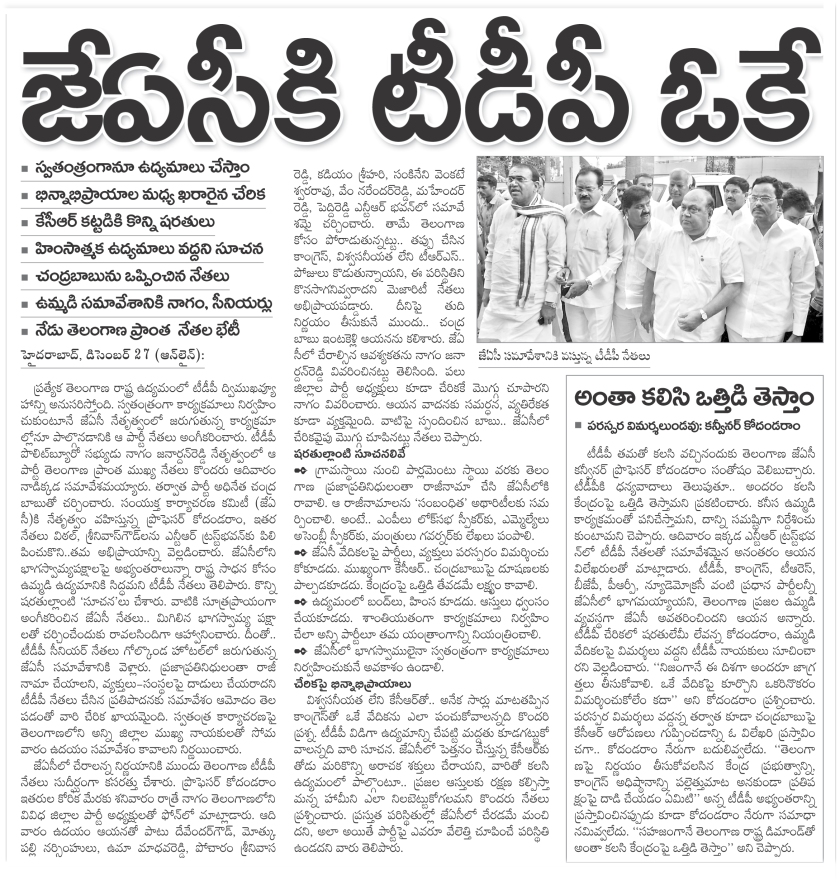 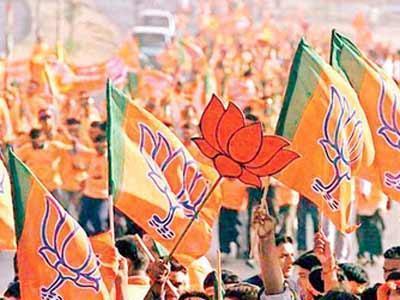 కట్టా మీఠా
Create a free website or blog at WordPress.com.